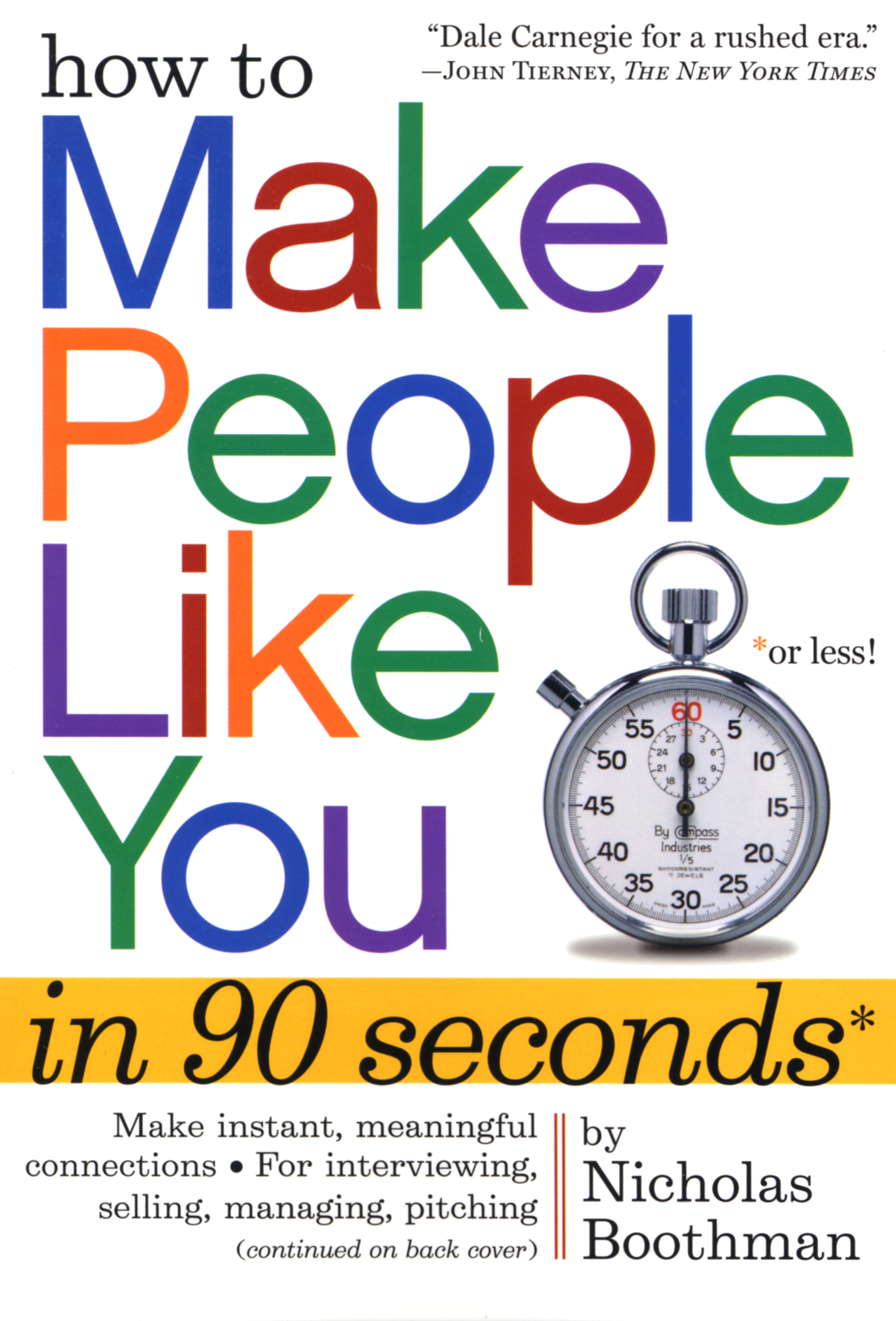 For retail, front-line and support personnel, individuals, associations and students of all ages.

This book is my bible,” says Good Morning America. “Training the new Supercops includes daily discussions on the works of Aristotle, George Orwell and Nicholas Boothman.” – The New Yorker.

Whether selling, managing, negotiating, planning, collaborating, pitching, instructing-or on your knees with a marriage proposal-the secret of success is based on connecting with other people.

How to Make People Like You focuses on the concept of synchrony. It shows how to synchronize attitude, body language, and voice tone so that you instantly and imperceptibly become someone the other person likes. Reinforcing these easy-to-learn skills is knowing how to read the other person’s sensory preferences-most of us are visual, some are kinesthetic, and a minority are auditory. Along the way the book covers attitude, nervousness, words that open a conversation and words that shut it down, compliments, eye cues, the magic of opposites attracting, and more. 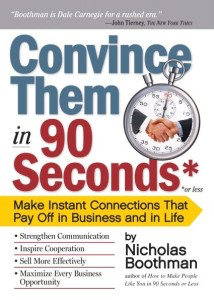 “MAKE TRUSTING CONNECTIONS. GET YOUR POINT ACROSS. INSPIRE COOPERATION.

The #1 most important skill for leaders, professionals, entrepreneurs, teachers and managers.

Whether you like it or not people decide how they feel about you in the first two seconds of seeing you, or hearing you, if it’s on the phone. If they like you they will unconsciously tend to see the best in you and look for opportunities to say “yes.” If they don’t like you the opposite is true. An interactive, fun and motivational speech that shows how to use the ABCs of communication (Attitude, Body-Language, and Conversation) to make a genuine, natural, connection with everyone. 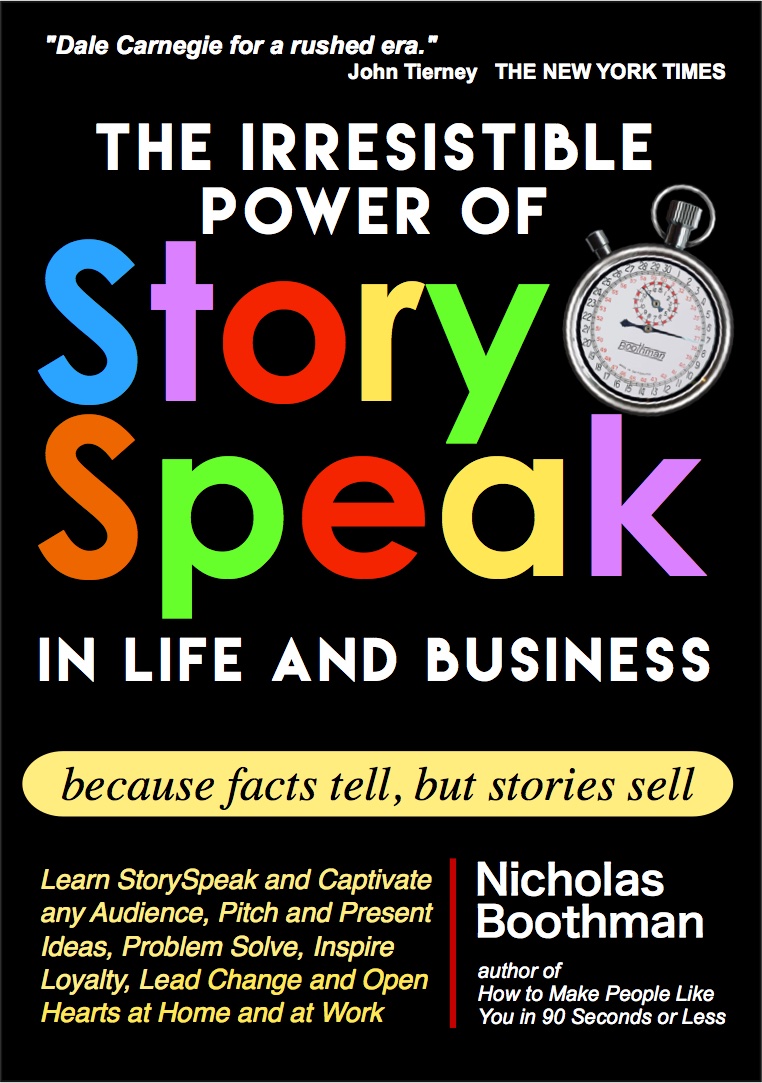 Research shows StorySpeakers earn more, out-perform, do better in school and college, get hired and promoted faster and get better service in person and over the phone than fact-speakers.

When Warren Buffett, the second richest man in the US and holder of the unofficial title “America’s Greatest StorySpeaker” was asked, “Do you enjoy your work?” he replied, “I tap-dance to work.” That’s StorySpeak.

Martin Luther King Jr’s “I have a Dream” speech was delivered using StorySpeak. So was Steve Jobs’ legendary Stanford commencement speech in 2005. As was Queen Elizabeth 1st “I have the body of a woman; but the heart and stomach of a king” speech as she lead her troops to victory in 1588.

In 1975, two screenwriters walked into a Hollywood producer’s office and said three words, “jaws in space,” and the blockbuster movie Alien was born. Pure StorySpeak. The names PayPal, Apple and Windows? StorySpeak. Mohammed Ali’s “float like a butterfly, sting like a bee” is StorySpeak.

Almost every successful book, movie or song ever written relies on StorySpeak to motivate and inspire people as does every riveting conversation, presentation and communication.

Great communicators, since the beginning of time, have depended on StorySpeak to change attitudes and behaviors, rally and inspire loyalty, and forge emotional connections – in as little as 30 seconds. 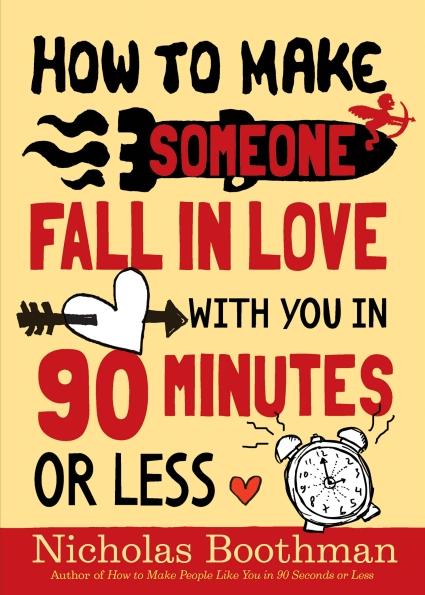 “A MUST-READ MANUAL FOR FALLING IN LOVE”

“Packed with solid information, practical strategies that work, and wonderful tried-and-true stories of people who used his techniques to find long-lasting love. What a wonderful book!” –  Cheryl Richardson

The feedback from many readers begins, “Please come to my wedding.”   Starting with a series of revealing self-assessment tests that show how to find your Matched Opposite (a person who makes you feel complete), how to make a fabulous first impression, tips on everything from attitude to accessories; how to be charming, not alarming; introductions, opening lines, and the 1-2-3 mantra of never hesitating.

There are techniques for starting and maintaining conversation and finding “Me Too” moments, plus the importance of flirting, incidental touch, self-disclosure, and more.

Real-life examples and analyses of actual conversations show the method at work. 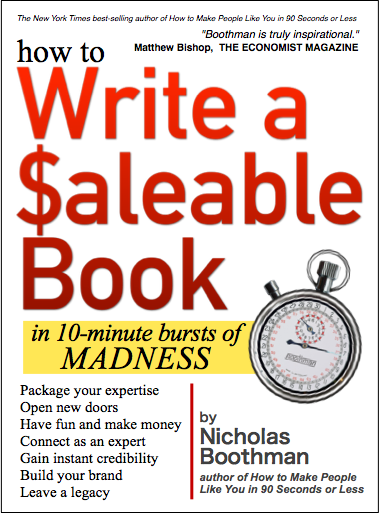 NEVER WRITTEN A BOOK BEFORE? NO PROBLEM

The problem for many would-be writers is that they never get started on their book. Or if they do get started, they never finish―or they slow down in the middle, procrastinate and lose interest. Add to the fact that if you don’t put the elements of your saleable book in place before you start writing, you don’t stand a chance.

Nicholas beat the odds. He went from being a professional fashion photographer who didn’t have the faintest idea how to write a book, to a professional author, with three international bestsellers in a row-in just 10 years. The chances of this happening are less than one in a million.

Along the way he learned a series of tips and techniques that will allow anyone with a burning passion to write a book that sells. Nicholas shares these techniques and takes would-be writers of all levels through the five essential steps to writing a self-help book that actually sells. Embark on these steps in the right order and your books will fly off the shelves. Get it wrong and you’ll have a basement full of unsold books.