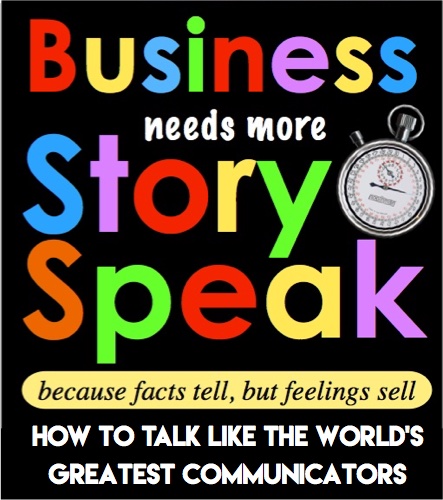 “The one skill every business and individual needs to master.” THE HUFFINGTON POST

It’s a proven fact that StorySpeakers earn more, out-perform, do better at school, work and home, get hired and promoted faster and get better service in person, and over the phone than fact-speakers.

When Bill Gates asked Warren Buffett “How do you define success?” Buffett replied, “I tap dance to work.” In StorySpeak that’s what we call “Talking in Color” because it slips an image into the imagination with a few simple words and they conjure up a happy feeling in the body and a memorable image in the brain.

Warren Buffett could have taken five minutes or ten paragraphs to factually explain how he defines success and how it makes him feel but instead he did it in five vivid, memorable words. He’s famous for talking this way.

Mr. Buffett credits his ability to conjure up simple word pictures and short stories as a big part of his success. He knows the golden rule of StorySpeak: facts tell but stories sell.

On the day Bill Gates resigned his chairmanship of Microsoft he was asked why he didn’t come up with the iPod idea. He replied, “It’s kind of like surfing. There you are out in the ocean. Sometimes you’re in the perfect spot for a great wave, sometime the other guy is.”

In this answer Bill Gates conjured-up a parallel between market trends and surfing. In StorySpeak that’s called an i-Kola – an acronym for it’s kind of like a…

Steve Jobs was obsessed with i-Kolas. He made complicated abstract ideas into happy pictures. He conjured “graphical interface” into “desktop” and called the computer “a bicycle for the mind” and we all know what a “mouse” is. The names Apple, PayPal and Windows are all StorySpeak. Happy words.

StorySpeak is calling men’s perfume “aftershave,” branding Albacore tuna as “Chicken of the Sea,” and telling the boxing world “I’m going to float like a butterfly and sting like a bee.” Happy stuff.

Martin Luther King Jr’s “I have a Dream” speech is full of metaphors, similes and parallel experiences.

When Queen Elizabeth 1 of England proclaimed “I have the body of a woman, but the heart and stomach of a king” she whipped her troops into a fervor and sent them roaring into battle more than five hundred years earlier. StorySpeak.

Charismatic Communicators get other people to tell their stories for them. This is called giving your story “legs.” If your word-pictures and stories are simple, different and emotive and your followers like them they’ll run off and share them with others and do most of your work for you.

Ask any high school student who his or her favorite teacher is and then ask why. Chances are the answer will be, “Because she makes things more interesting” or “Because he tells stories.”

When educators StorySpeak they keep their students engaged and interested by transforming learning into lively experiences.

These teachers know that a great storyteller must first capture the student’s imagination and hold their attention and second, transport them into another world. And they know the way to keep those students in that other world is by continually increasing the tension in the story until the conclusion is reached, the lesson learned and the message delivered.

Advertisers polish their stories, social media spreads them, politicians bend them, religions exalt them and motivational speakers use them to capture the hearts and minds of their audiences and transport them onto new horizons

When things get competitive it’s all about the story.

Today’s corporate leaders like stories because they bring their company’s heritage to life in the imagination. They share their stories with their customers, their staff, their new hires. They live them. Corporate leaders StorySpeak their visions and goals.

Successful entrepreneurs StorySpeak naturally. They use stories and word pictures to quickly get their ideas across in a tasty manner and make them stick. They talk about planting seeds, bearing fruit and cutting out the deadwood. In 1975, two screenwriters walked into a Hollywood producer’s office and planted three words, “jaws in space,” and the blockbuster movie Alien was born. Pure StorySpeak.

Sales people know their stories are as, or more, important than their products to build trust and reinforce their brand

Patients and doctors have long understood the power of telling and listening to personal accounts. Patients want to hear the stories of other patients who’ve gone through the same thing.

Imagination is at the heart of one of the longest-running mysteries in western medicine: the placebo effect. This is the idea that pain or illness can be relieved through “fake” medicines like sugar pills, just because the patient believes he has received a real treatment. Researchers know the placebo effect is a perfect example of the power of the imagination to engage forces beyond a patients’ conscious control.

The Annals of Internal Medicine recently published a study examining the effects of storytelling on high blood pressure. In the test group, listening to personal stories helped achieve and maintain a drop in blood pressure as effectively adding more medication. “Telling and listening to stories is the way we make sense of our lives,” said Dr. Thomas K. Houston, lead author of the study at the University of Massachusetts Medical School in Worcester. “That natural tendency has the potential to alter behavior and improve health.”

More and more companies are catching on to the importance of storytelling. At Nike, several of their senior executives are called “corporate storytellers.” They explain the company’s history to everyone from vice presidents and sales reps to the hourly workers who run the cash registers at Nike’s stores.

The most recent advertising campaign from Domino’s Pizza features true stories of franchisees saying things like “I bought my first franchise with the money I saved at college.” “I mortgaged my house to buy my first franchise.”

Lego shares solid data with real-world stories about families bonding while building together.

‘The Magic of Heineken’ tells of the beer company’s founding in Amsterdam in 1864.

A famous AARP TV commercial starts: “Our story began when Ethel Percy Andrus came across a retired teacher living in a chicken coop because she could afford nothing else. It inspired her to found AARP.”

Successful blogs use stories to hook the attention of their readers and transport them around the world in a million ways.

TripAdvisor is filled with true stories from people enhancing their lives as a result of their services.

TED’s mission statement is to spread understanding through stories.

Facebook, Linked-in and hundreds of dating sites invite people to share their stories to fill gaps in their lives.

“A great product with a great story is a winning combination.”

Fundraisers weave real-world stories into their communication efforts to capture interest, elicit engagement and get the wheels turning.

Online they use the StoryBook approach, alternating photos with short, ten second blocks of text.

They found that turning the spotlight on their  participants, staff and volunteers was not just a great way to show gratitude for their involvement, but also a great way to connect with the community at large.

Research shows that Jurors construct stories inside their heads to provide meaning to situations they never experienced first hand. The problem with this is they use their personal emotions, values and beliefs to evaluate the credibility of defendants, witnesses and evidence. This may not benefit the lawyer or the client.

A great trial attorney will beat them to it by planting his or her favorable take on the story so vividly in the decision-maker’s imaginations, they see that version as the truth.

On the Trade Show Floor…

Stories are quick and they stick. Customers like hearing them because they quickly build trust and make relationships human and personal.

Two weeks after the show people will remember you and your stories before they remember the booth or the facts and figures.

Romance is the art of expressing sentimental love. “Romance” is also the French word for story. At its simplest, it is amorous gestures towards the one you love. At its best, it is deliberately creating wonderful memories that serve to form a foundation of specialness on which you build the loving relationship of your life. This comes from the stories you create together. Stories you tell yourself, each other, and to other people.