I just had this crazy idea!

In 1762, John Montagu, the Earl of Sandwich, had a crazy idea. He was a big-time gambler who didn’t like to leave the gaming table. When he got hungry he told his servants, “Bring me a slice of meat between two slices of bread.” And the sandwich was born.

Today you can eat a sandwich while you boot up Windows in your Levi’s and wipe the ketchup off your fingers with a Kleenex – because these crazy ideas are now enduring big ideas, and have created jobs for countless millions and built considerable fortunes for their originators.

Crazy’s just another word for creative and passionate.

First you get a crazy idea, like something from a fairytale that needs magic to make it happen. Then you picture it as reality, test it and program your imagination to make it come true using this risk/reward calculator. 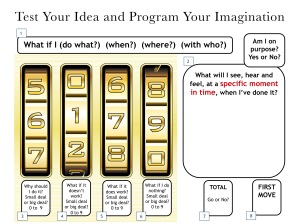 “Do one thing every day that scares you. On the other side of that fear all your opportunities are waiting for you.”